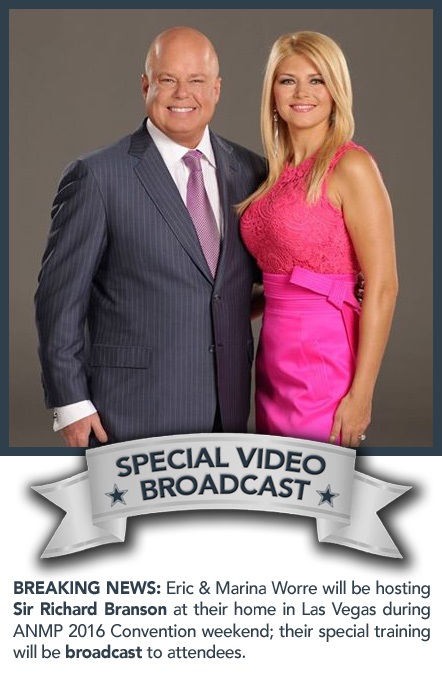 Eric has become an accomplished trainer and has conducted hundreds of live events around the world, teaching people how to become Network Marketing Professionals. He has shared the stage with virtually every major speaker in the Personal Development and Network Marketing space.

Eric is the author of the International best-selling book Go Pro: 7 Steps to Becoming a Network Marketing Professional, which has sold over 300,000 copies in its first 10 months and has become a “must read” for anyone who is serious about building their network marketing business.

Co-founder and President of NetworkMarketingPro.com, Marina Worre has always been passionate about helping people achieve well-being in their lives and live up to their true potential. A businesswoman all her life, she now devotes her time to running the Network Marketing Pro company.

Marina and Eric are also the Executive Producers of the popular documentary-style movie, Rise of the Entrepreneur: The Search for a Better Way, which has been called the “Most Powerful Recruiting Tool in Network Marketing History.” This documentary gathers today’s best experts and thought leaders to forever change how you view work, wealth and entrepreneurship – especially as it relates to the Network Marketing Professional.

Both Eric and Marina are big philanthropists and supporters of several charity foundations, including the Starkey Hearing Foundation. And as they travel the globe to help people and their families throughout the Network Marketing community, the Worres are also raising 5 amazing kids!

Together, both Eric and Marina are engaged in an effort to raise all ships and allow this profession to truly take its proper place in this world as “a better way.”

UPDATE: Eric & Marina Worre will be hosting Sir Richard Branson at their home in Las Vegas during ANMP 2016 Convention weekend; their special training will be broadcast to attendees.