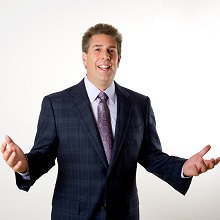 An entrepreneur all his life, Kevin Marino had numerous businesses, including four bars and restaurants, as well as a jewelry manufacturing and wholesale business.

But in 2008, his world came crashing down around him with the real estate meltdown and an emotionally and financially draining divorce. Kevin was broke. Just to earn enough to eat and put gas in the car, Kevin refereed three high school sports teams.

It was at that point his life took an interesting turn, and his passion for Network Marketing powered up.

He teamed up with business partner Bob Doran - and in time, built a huge team of over 146,0000+ customers and distributors in all fifty states.

He has led that team through trying times and on to victory, demonstrating the strength of his leadership and servant's heart.

Kevin was recently interviewed as a Master Networker in the profession's premier publication, Networking Times.

A respected leader, top income earner and professional, Kevin has also served on the Board of the Association of Network Marketing Professionals (2012-2013).