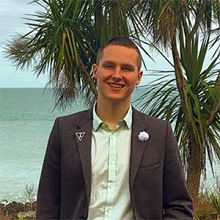 Luke Hessler is from a small town in Norther Michigan called Traverse City. He went to school at Michigan State University and studied International Business and Communication. He launched his Network Marketing business as a sophomore in college and quickly found he a passion for the business. In the last 4 years, Luke has built a downline totaling over 26,000 people in 15+ countries, is a multiple 6 figure career earner.

Luke has generated well over 15 million dollars in total revenue. Luke got started in the industry at 19 on a loan from his parents to teach him a lesson that "these things don't work" and in 2 years he successfully went from being a broke college student on the ramen noodle diet to earning monthly pay checks exceeding that of his dad who's a doctor.

He believes that becoming financially successful is not a matter of chance but rather a matter of choice, and with the correct desire, platform, and mentorship ANYONE can make their dreams a reality. His life purpose can be found in the mission statement of the Young Pros Movement which he pioneered, "To connect and develop the next generation of leaders who share the desire of leaving the world a better place."