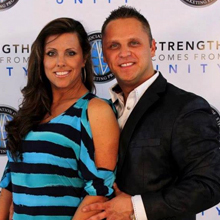 Travis and Summer Flaherty reside in Sunny Arizona, have been married for 17 years, and have 5 beautiful children together, with another on the way this June. The Flaherty’s own and operate a successful marketing, consulting and speaking business. The Flaherty’s are best known for their ‘family first’ culture, for being a powerhouse couple inside the direct sales industry, and for being advocates of small business, and self-reliance, through entrepreneurship.

The Flaherty’s have owned and operated many successful traditional businesses over the past two decades, as well as building to the #1 position in three different network marketing companies. The Flaherty’s now serve the direct sales community via speaking, coaching, mentoring and consulting.

Most recently, the Flaherty’s have founded Entrepreneur-Life University, aka: ‘ElifeU’. ElifeU is a fully automated, online & on-demand (studio-production) education program for all entrepreneurs.